“Punch Royal dates back to the end of the 17th century,” says cocktail historian David Wondrich in his book Punch, or the Delights and Dangers of the Flowing Bowl. “It was drunk by courtiers, pirates and everyone in between.”

Punch in general has a long and storied place in the annals of festive gatherings.  As self-proclaimed “Georgian Junkie” Emery Lee points out, “The Georgian era is widely known for its excesses, the least of which was heavy drinking. A typical Georgian gentleman of leisure would spend his days frequenting one of the myriad coffee rooms and his evenings, many times into the wee hours, in a gaming house, tavern, or gentleman’s club roistering with his cronies over a brimming punch bowl.” 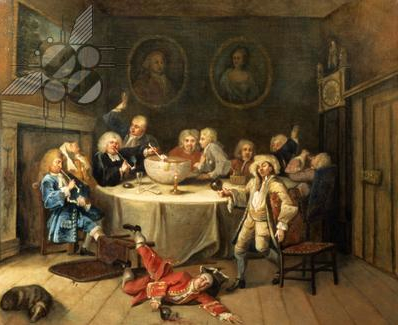 Painting by William Hogarth from the mid-1700s

While I don’t expect our NYE party to have a Georgian theme, and we may not have a lot of courtiers or pirates in attendance, I do like the idea of “roistering with … cronies over a brimming punch bowl.”

Barman Matthew Campbell has crafted his take on the classic Punch Royal with winter in mind.  It’s called Medianoche, and according to an email from Matthew it goes like this:

Bubbles are a given since it’s NYE.  Add Matusalem rum because it’s delicious and clean.  The classic recipe calls for raspberry syrup but I made a more seasonally appropriate spiced huckleberry compote. It also calls for orange juice, as many punches do, so blood orange makes perfect sense for the winter – and it adds dramatic color.  Passion fruit purée & a bit of mango tea for a slight island kick and also to provide tartness in lieu of lemon or lime.  Definitely more fruit forward than winter spiced.  Ladle into a flute and start dancing…

JP (with input from MC)