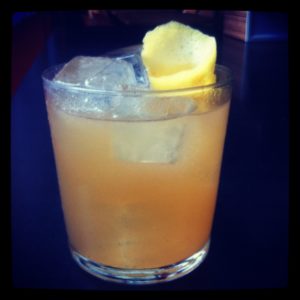 There are two recent additions to the cocktail list – Tranquilo, which was just added this week in place of the Del Rio (more on Tranquillo soon) and Manzanita (“little apple”), which features Centenario Reposado, Becherovka, apple-fennel sour and ginger beer.

The apple-fennel sour starts with caramelized fennel & apple in piloncillo (unrefined sugar) which is then infused with cumin, coriander, Mexican cinnamon (canela) and allspice – add lemon juice and you have our twist on the apple-fennel sour.

Becherovka is an herbal bitters made in Karlovy Vary, Czech Republic (home of a legendary hot springs) – it is made from a secret blend of herbs, but the prevailing flavor notes are cinnamon and ginger.  Despite the presence of both the Becherovka and the spices in the sour, the various herbal and spice notes are subtle, and present themselves in a polite sequence rather than clamoring for your attention at the same time.   The addition of the sherry brings the drink into sharp focus and provides a dry, woody finish.  And the lemon juice component of the apple-fennel sour brings bright acidity to contrast the spice and sweetness of the apple.

Barman Matthew Campbell relates that one goal with this drink was to build spice directly into the drink so as to steer clear of the popular practice of microplaning spice atop fall drinks.  It all adds up to a drink of great complexity that evokes the season and is surprisingly easy drinking.

JP (with help from Matthew C)