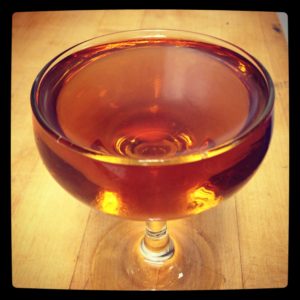 Why is our new cocktail called Brass Tacks?  For no particular reason except that its color is “brassy”.  Let’s get down to brass tacks – we’ve all heard some variation of this expression over the years, and I have always taken it to mean “let’s get down to the essentials, to the heart of the matter.”   “Brass tacks” also connotes no-nonsense, no frills, bare essentials, which isn’t a stretch for this drink either.  It’s an honest, spirituous drink, though it does have its share of subtle flavors.

The origin of the term brass tacks  is a bit murky, but from what I can glean it was first used in Texas in the mid-1800s.  It seems to refer to the brass tacks used to bind upholstery or book binding material.  Seen in this context, Let’s get down to brass tacks seems to be saying “what holds this thing together?”

Whatever the origin of the name, it’s as good a name as any for an unfussy, brass-colored drink. The understated sweetness of the pear liqueur is offset by the bitter tones of amaro, the spice of cinnamon (a natural foil for pear) and the vanilla notes of Calle 23 reposado tequila (aged in French oak) – served up.  ¡Salud!